System to provide ratings and corresponding feedback for enhancing the genuineness in the ratings.

Embodiments of the invention provide means to the system’s users to provide ratings and corresponding feedback for enhancing the genuineness in the ratings.

The system includes a memory coupled to a processor. The memory consists of one or more instructions executable by the processor to enable the system’s users to rate each other based on at least one of sharing, exchanging, and selling one activity, service, or product. The system may provide a mechanism to encourage genuineness in ratings provided by the users. Furthermore, the instructions facilitate the rating receivers to provide feedbacks corresponding to the received ratings. The feedback includes accepting or objecting to a particular rating. Moreover, the memory includes instructions executable by the processor to enable the system to determine the genuineness of an objection raised by a rating receiver. 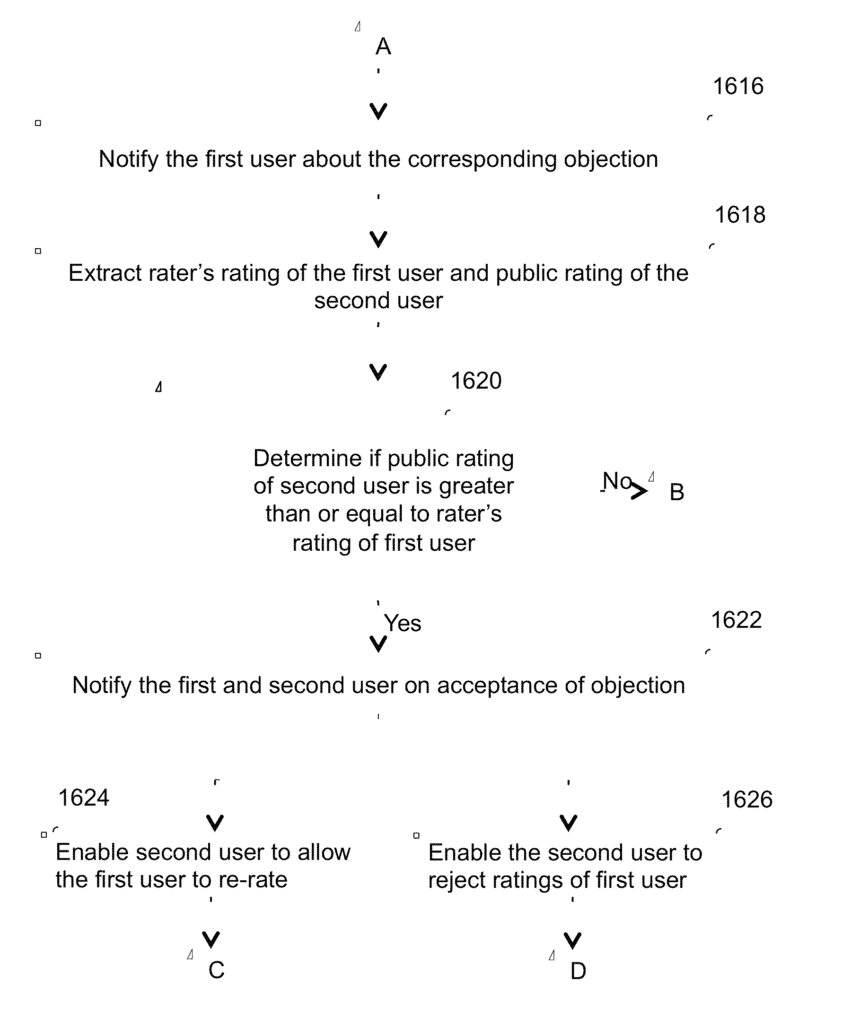 FIELD OF THE INVENTION

Social networking applications – enhancing the reliability of ratings provided to users in a social network.

BACKGROUND OF THE INVENTION

In the current scenario of global inflation, resource management is increasingly required to cut the cost and overcome many other problems.

For sharing a resource such as a vehicle, an individual needs to search for people willing to join for transferring a car for riding together to a particular location. This requires spending time searching for reliable people to share the ride. Further, in existing systems, a user can post a query for vehicle sharing. Corresponding to the post, other users of the system who are interested in sharing the vehicle for the ride (from now on may be referred to as “interested users”) can reply to that query regarding their interests in sharing the car. However, in these systems, the interested users may be completely unknown to the user who posts the question. Thus, the main problem in such systems is the lack of credibility in the interested people, which typically is the prerequisite for many users.

Further, in these systems, the user has to wait until any interested user responds corresponding to the user’s query. Furthermore, the user may need to contact the other interested users, either personally or telephonically, to discuss various parameters for sharing the vehicle. Such parameters may include but are not restricted to compensation/expense that may be shared between the users, timings, and various conditions corresponding to the sharing of vehicles for a ride. This wastes a significant amount of time on the user’s part.

In addition to resource sharing and exchanging, many individuals like to look for people for collective activities, such as recreational activities. An individual usually searches for like-minded people for any recreational activity, such as playing, riding, etc. For example, an individual may be willing to dine with someone or maybe ready to play chess with someone good at (or interested in) playing chess. For this, the individual may be required to spend a considerable amount of time searching for any person around who is like-minded and credible to go along with for any such collective activity. In such cases, the credibility of any unknown person is always a question for the individual.

Based on those mentioned above, there is a need for a system and a corresponding method to support resource sharing with credible users and without requiring much time consumption at a user’s end. Further, the system should provide support for collaborative or exchangeable activities with reasonable and suitable users based on a user’s interest. Furthermore, the system should support a user for sharing and/or exchanging services or products. Thus, the system is required for providing support to a user in sharing/exchanging resources/services and to overcome the shortcoming of the related arts.

Embodiments of the present invention provide a system for enhancing the reliability of ratings provided to users in a social network.